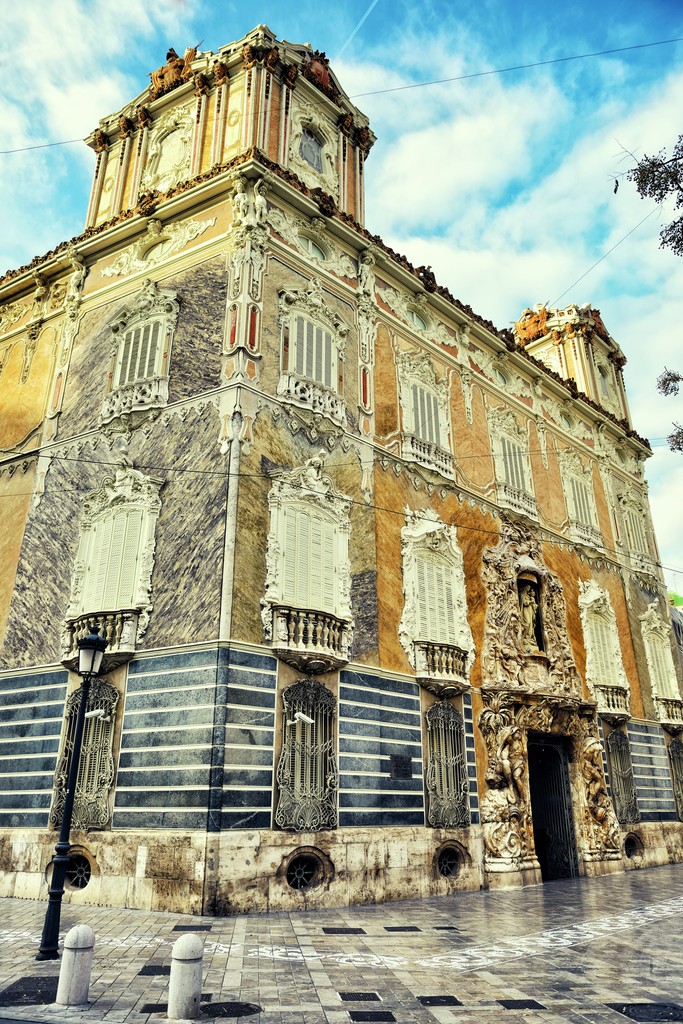 Return on your steps until you return to the Reina square (Plaza de la Reina) - pass through archaeological remains of l'Almoina and the Casa de Punt de Gantxo. Cross the Reina square (Plaça de la Reina), until you reach Pau street (C/ Paz), take it to the left. Turn on the second street that you find on your right (Marqués de Dos Aguas / Poeta Querol) and you will see the Marquis de Dos Aguas Palace.

The palace of the Marquis of Dos Aguas is the product of a radical reform carried out on the old house of the Rabassa de Perellós, holders of the marquisate of Dos Aguas, in the 1740s in a pronounced rococo style. With an irregular square plan, organized around a patio and with towers at the corners, its facades rise with a ground floor and two heights, and on one side opens the main door, made of alabaster by Ignacio Vergara on the design of Hipólito Rovira.

Presided over by the image of the Virgin, two streams of water descend from it, alluding to the title of the Marquises, with two Atlanteans on either side symbolizing two rivers, all with an aspect of overflowing voluptuousness.

At that time the entire façade was decorated with frescoes by Rovira, but in 1867 the palace underwent a new remodel -work by José Ferrer-, and the paintings, which were in poor condition due to humidity, disappeared and were replaced by stucco in gray and pink tones imitating marbles, and also the balconies with a French flavor were made, with undulating railings.

Inside we can still see today the eighteenth-century floats and the nineteenth-century, saloons with their original decoration, recently restored, while the second floor houses the González Martí National Ceramic Museum, with an important collection of pieces from Antiquity to the most modern designs.

This museum is named like its founder. What famous Valencian is it?