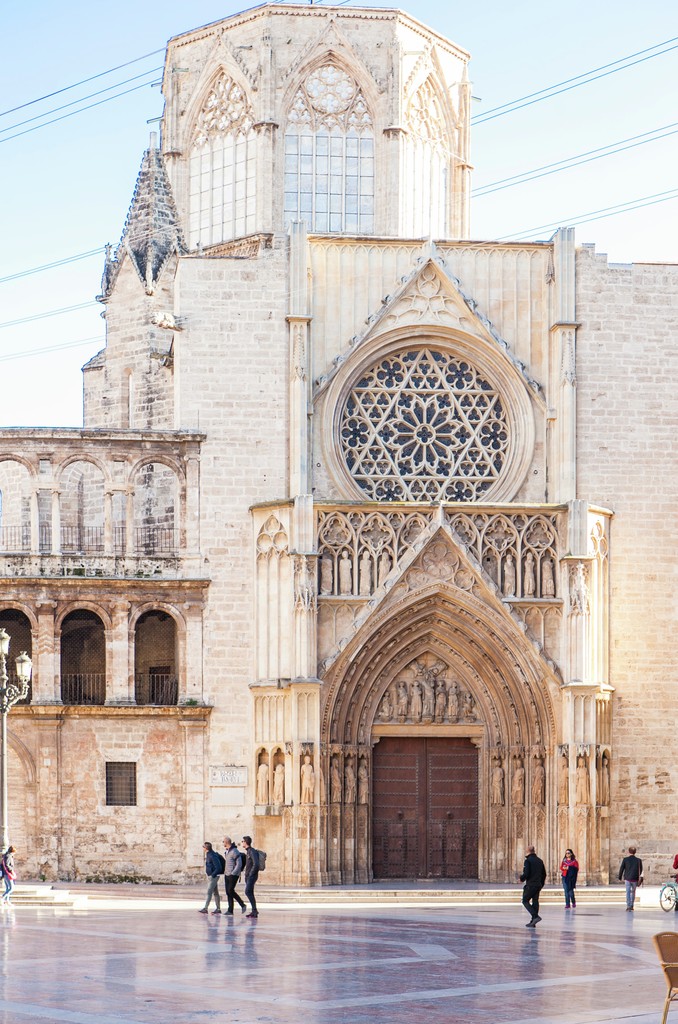 To the right of the Basilica of the Virgen de los Desamparados you will see the Cathedral.

The first access door that you will see is that of the Apostles. In front of this door the Water Court is held every Thursday at 12 noon - the only legislative structure that remains of those established by Jaime I and whose resolutions are final. It is made up of eight farmers who still wear their typical black blouse from the people of La Huerta, who are democratically elected every two years by the remaining irrigators. Seated in a circle on separate wooden and leather armchairs from the 17th century, they are invested with a corresponding authority. The structure of irrigation, the participation of farmers and the speed with which problems are resolved, has projected the Water Tribunal to the international arena, considering it a model institution. Without folklore, effective and essentially Valencian.

Consecrated in 1238, the Cathedral is the seat of the Archiepiscopate of Valencia and is dedicated to Jaume I the Conqueror. The Cathedral rises above the old Balansiya Mosque as it was built to mark the territory of Christians versus Muslims.

In the Cathedral of Valencia, the Gothic style predominates, although it preserves numerous elements from different periods, from Romanesque to Baroque, since its construction spanned several centuries. One of the jewels of the Cathedral is the Renaissance frescoes on the High Altar. Also, inside is the Cathedral Museum and houses the Chapel of the Holy Chalice.

There are three access doors to the cathedral: Apostles gate, Iron’s gate and Almoina’s gate.

Under the arch of the door of the Apostles you can see the Virgin Mary and three figures on each side. To be able to advance, indicate in which position the two figures at the ends are?