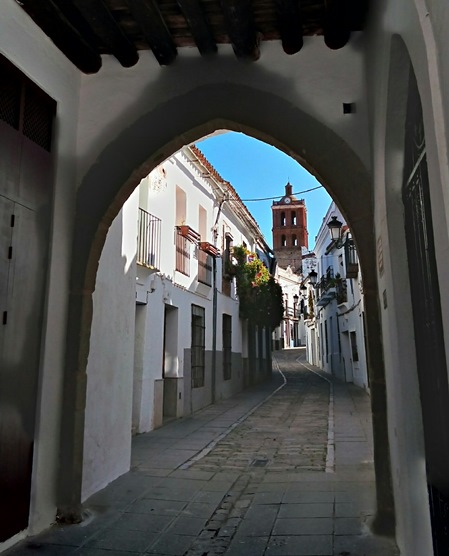 Go down the avenue in front of the entrance to El Rosario to follow the direction of the town's walls which are hidden behind the houses which were built later. After about 400 m (5 minutes on foot), you will see the Puerta de Jerez on your left.

This was the west entrance to the walled town, and here began the road which took us to a town called Jerez de los Caballeros.

The gate was guarded by St. Crispin and St. Crispiniano, patron saints of shoemakers. On one of the gateway's stones we can observe the engraving of a Castilian foot, a measuring unit used until the 19th century.

On the top floor you can visit the Chapel of the Virgen de la Caridad (Virgin of Charity), where a statue of Christ which is part of the Wednesday of Easter Week processions is kept. During a trip to Spain, John F. Kennedy Junior, son of the famous U.S. President Kennedy, was named an Honourable Brother of the hundred-year-old brotherhood, as it was his donation that allowed the chapel to be restored.