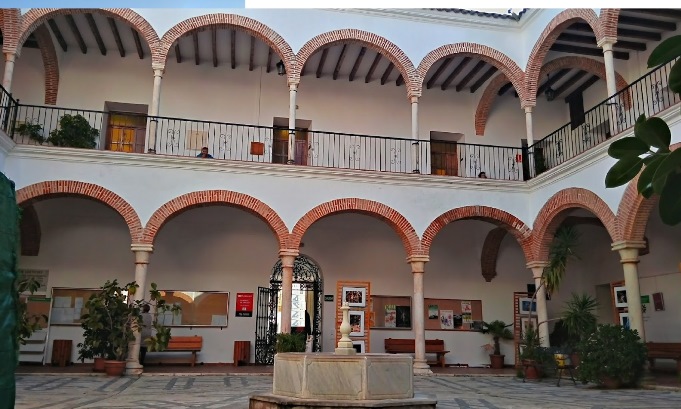 From the place in the square where you are at the moment, go towards the lowest part. There you will see the stately home of the Marquis of Solanda, which has a marvellous neo-mudejar interior patio.

At this point you could take two possible streets, the first begins with a tunnel and the second begins at the House of the Mendoza de la Rocha family, which has a doorway flanked by two marble coats of arms. Take this second street (Gobernador Street), until you come to a square with a marble fountain called the Circular Fountain (Pilar Redondo). Curiously, in Zafra all the fountains are known as "Pilar" (pillar or cornerstone) rather than "fuente" (fountain).

In this square you will see a 16th Century palace which is the Town Hall. This palace has been home to the Tertiary Nuns of the Cross, later it was used as a public school and today it houses the Town Hall.

Over the main doorway of the Town Hall we can see the coat of arms of Zafra, which shows a Vase of Lilies and a Castle which alludes to the ancient Muslim fortress which existed on the peak of the nearby Sierra del Castellar. The number of lilies in the vase of the coat of arms will allow you to continue on your way.